I remember the early days of my guitar infatuation. Back then (circa 1960), the only places you could hear live guitarists was the local ‘youth clubs’. These were often a local hall hired out for a few hours and a small charge at the door to let you in.

At the time, most groups just played instrumentals – although the odd small group would have a singer who would step up and do a few rock and roll or chart songs. Things were simple back then, but because the advent of groups were new, they were incredibly exciting.

There were bigger and better local groups with exotic names like
Phil and the Stormsville Shakers – and boy did they sound great! 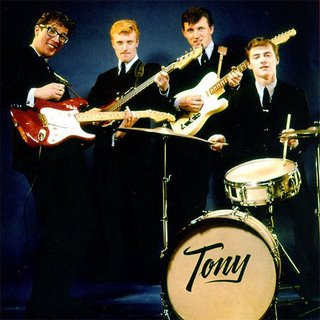 Early guitar instrumental hits like “Apache”, “Walk Don’t Run”, “Guitar Boogie Shuffle”, “Telstar”, and numerous others became the standard repertoire for local groups. After WWII, most guitarists were ex-dance band – so our parents were well catered for at dinner dances and the like.
But for us spotty teenagers there was little in the way of music and social life. We chatted up girls at bus stops, took them for a coke (the drink variety!) or coffee at the various coffee shops, and met up at the above ‘youth clubs’
But where is this nostalgia leading you may ask?
Echo Units.

The dear friend who helped me on the way to getting my first guitar, Derek Lee, had a “Bird” amplifier with built-in reverb. So even my early fumblings sounded spacey. I was always around his house learning to play on his guitar – trying to play a few notes from say, a Duane Eddy  tune (remember ‘Because They’re Young?). He taught me the first 3 notes to the main theme of Apache – boy – was I hooked….

Yeah! Sandie Nelson “Let there Be Drums”, “Red River Rock”….sigh…
Anyway, Derek showed me a few simple tunes and chords, and generally helped me in many ways too numerous to mention. He sadly passed away at the young age of 23 years from throat cancer – and he didn’t even smoke.

I got my Dad to buy me an early Vox Ace guitar (red, of course,  two pickups and a wang bar), which looked to my eyes like a sort-of Fender Stratocaster (although I didn’t even know what a Fender was back then – but Hank Marvin Had one – and it looked hotter than girls!!)

It must have been a couple of months later when I turned up at Derek’s house – and he had a Watkins Copicat Echo Unit!!!!!

Jesus, Mary and Joseph! It made me sound like Hank (and helped cover up a few ‘bum’ notes too). That was it – I had to have one. Fast forward two months, and with help from my Dad again (“This is just a craze – it’ll never last long – you’ll get bored….etc”)

I had a Hire Purchase agreement for a second-hand amplifier and a new black Watkins Copicat…..I used that darn thing right through the sixties and half of the seventies, when I finally replaced it with a small pedal along with a host of other effects units.

I know, the Beatles came along in the mid sixties, and echoey guitars went out of fashion, but you could still use a little echo to ‘lift’ your guitar sound.

If you read my blog, you’ll know at the ripe age of 61, I’ve rekindled my love of the guitar, and started investing in some new guitar equipment. Isn’t life tough eh!  When I needed good gear I couldn’t afford it, now I’m just ‘doodling’ for my own pleasure – I’ve got enough money to buy stuff that I ain’t good enough to play on or deserve!

A few weeks ago, I’m doing a little work in London UK, in Denmark Street to be precise, and I went into Regent Sounds. The Sales guy is I believe, Canadian – and real friendly and helpful. I tell him I’m looking to update my old 70’s echo foot pedal, and I’d recently seen a great review for an expensive digital delay unit.

Well to cut a longer story short, he gave me an A/B demonstration between that unit and an ‘old fashioned’ bucket-brigade’ echo unit. I’m darn pleased he did. The Bucket-brigade technology knocked the latest state-of-the-art pedal into a cocked hat (it kicked it’s a*se!). The digital unit sounded harsh, tizzy, weak, clinical.

Round of applause please for my new Electro-harmonix Deluxe Memory Man echo unit. Yeah, you may remember the name from way back – but don’t let that put you off.  The echo is full, woody, dynamic, squashy, warm, whatever…it sounds great. I’m plugging it directly into my vintage re-issue Fender Blues Deluxe. Sounds great on slow blues stuff too….

It cost half the price of the latest and greatest digital echo, and you know what, you can also get great (non-digital) chorus-vibrato sounds out of it.

The Agony and Bliss Of Entrepreneurs

I can help you boost your career in Project Management